Ontario fishermen have had many a store to purchase the sporting goods and fishing tackle needed to equip their vacations or outings.

The James family, from Perth, Ontario, operated one of the most prominent hardware operations in Ontario through the 19th, 20th and 21st centuries. Sporting goods, and especially fishing tackle, were the mainstays of their operation.

George James arrived in Canada at the beginning of the 19th century. George was the son of a blacksmith and, in 1892, he joined up with Daly Reid to open a hardware store. In 1910 they bought out a rival hardware company, Warren & McCarthy, and set up business at Gore and Foster Streets in Perth.

The James Brothers knew the importance of the fishing industry to this Rideau Lakes region. They employed many tactics to lure tourists to this beautiful region, rich in history and glamorous lakes. They promoted the region with James Brother postcards, calendars, the famous Big Fish Contest and they would travel to the U.S. sporting shows to promote Rideau Lakes and Perth, Ontario.

The Big Fish Contest started in 1946 and ran yearly, with many anglers competing for the top prizes. In the 1950s, James Brothers would mount each winning fish from each category and display them in the store for all of their customers to admire. Their postcards would also reflect top fish, angler and lure used to capture the top prize. James Brothers were also instrumental in running the annual Perth Sportsmen Show at the town hall.

James Brothers also designed and made their own fishing tackle. George James Jr. spoke of his grandfather manufacturing Rideau Spoons as far back as the 1920s. Along with their own line of tackle they sold many products from well known Canadian and American tackle makers.

In the early 1930s George James was president of the Perth Trade Board. George reached out to many well known tackle companies, such as Pflueger, Shakespeare, B.F.Gladding & Co., Ashway Line Co. and Horrocks-Ibbotson from New York. His goal was entice these companies to set up a Canadian manufacturing company in Perth, Ontario. A lot of correspondence is evident in the letters I have, but all the companies stated that the Rideau Lakes area was a fantastic opportunity but that the Canadian tariffs were too much to endure at the time.

In the 1940s, James Brothers enlarged their tackle line and began selling (and renting) motors and wooden boats to anglers. A 1947 article in the Perth Courier stated,We have the largest and most up-to- date line of tackle ever shown in Ontario, from the largest makers in England, Sweden, Norway, the U.S.A. and Canada.

By the mid 1960s the department store was getting too cramped and the fishing tackle operation was moved to one of their other buildings on Herriott Street. Georges son, Alan, ran this department until his retirement in 1977 and his son, George Junior, took over until the late 1980s when the hardware business was sold to the Weir Family, ending the James Brothers dynasty.

If you find a lure or packaging that states, James Brothers, you will have found a piece of Ontario angling history. The most sought after item from James Brothers would be the very scarce and valuable Canadian Minnow lure box which was printed at their own store. 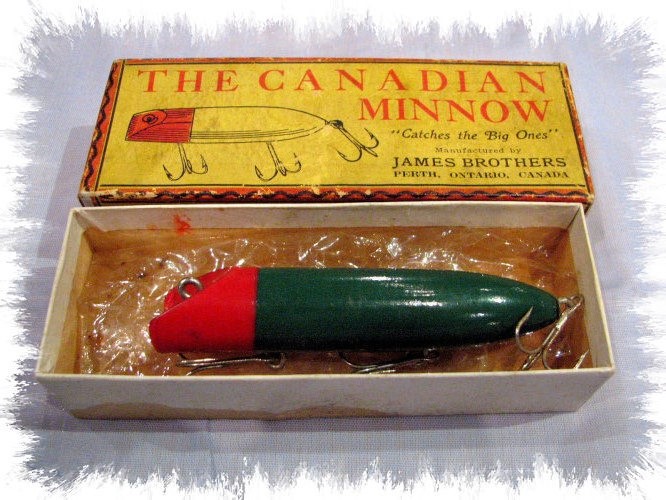